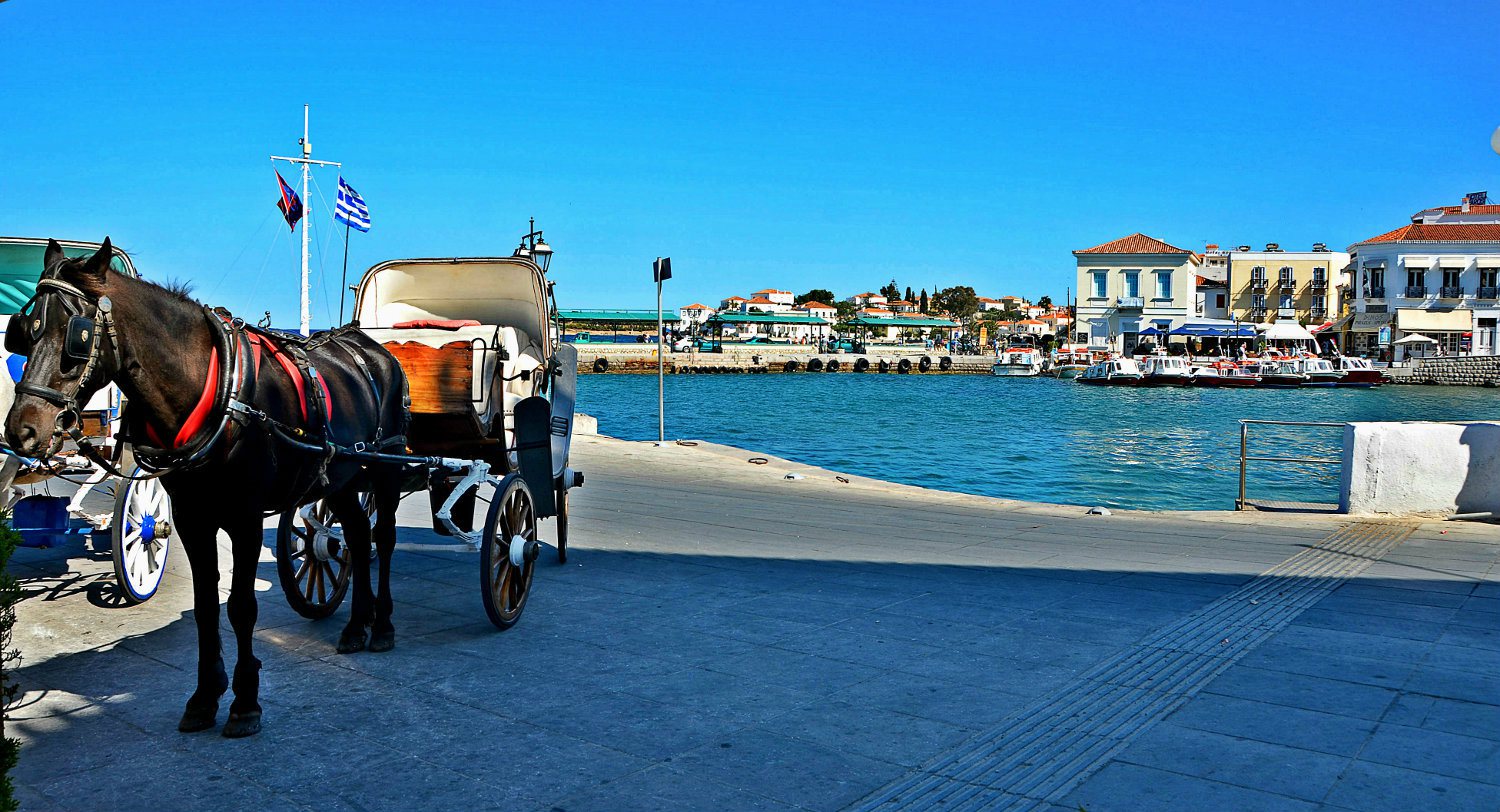 Marvellous islands with beautiful clear waters great for swimming, calm enough for sailing, ideal winds for water sports, memorable fresh fish dishes and exquisite sea food, nightlife and fun until dawn, all in reasonable prices!
Each one of these islands has earned its own special place and played a leading role in ancient as well as in modern history. Many great sea men, navy leaders and artists were born there. You will be impressed by the ancient temples, Byzantine churches, museums, the fishing villages, the unique traditional architecture and the narrow streets full of flowers that hang from the balconies. Enjoy unforgettable rides around the countryside by bicycle, water taxi, carriage or a donkey, and don’t miss having a taste of the delicious local products. You will enjoy different images, sounds, flavors and tastes, regardless of the means of transportation you choose.

If boat is your choice, you can reach the resorts on the nearby coasts of the Peloponnese, e.g. Epidaurus, for a summer performance at its world-famous ancient theater. On your way, you will have the chance to enjoy swimming, fishing or diving to explore old ship wrecks in the colorful underwater world. The weather will probably be ideal on your getaway, since the wind shall not exceed 4-5 Beaufort and the destinations are 15-50 nautical miles from Piraeus. Special events and festivities are held year-round in the Argosaronic islands. When you anchor in small marinas, there are independent salesmen for supplies, water and electricity, fuel, taverns to eat, retailers for shopping and night clubs. Regattas are often organized and you can participate or take diving lessons or even try other water sports. Many experienced yachting companies will offer you all the services and information you need, and support you regardless of your vessel being crewed or not.

Poros is the island of peace, romance and jauntiness. It is covered by pine trees which reach the jagged shores or the sandy beaches. The residents of Poros are like the ones on all Saronic islands: spontaneous, decent and hospitable.

The houses by the sea are big and neoclassical in contrast to the simple two – story houses in Brinia, Mylos, Pounta and Kasteli. At the center of the town you can find the archaeological museum, the library, reception rooms, and on the beach, there’s an open air cinema. There are many little taverns spread among the picturesque backstreets of Poros.

Along the pier, the visitors see plenty of cafeterias, restaurants, tourist shops, bars and discos with international and Greek music. On the outskirts of town, in the Northwest, there are the Military Navy facilities at the Progymnastirio, the first residence of King Otto. This is where, nowadays, the pretraining of the sailors takes place. After the Progymnastirio, a small canal separates Spheria from Kalavria.

After Sinikismos (Settlement) the visitors follow the trail that continues passing through a wonderful landscape full of pine trees. The picturesque church dedicated to Virgin Mary, the trees and the running water give this place an exceptional beauty. Moreover, the visitors can enjoy the wonderful view that nature offers. The visitors will meet another picturesque church before they finally arrive to Palatia, where the ruins of the ancient Temple of Poseidon lie. After the canal bridge there is the Sinikismos which was first inhabited by Minor Asia refugees. To the west lies Perlia. The road continues along the beach, passing through Neorio, the love port, and the Russian Dockyard, with the little island Daskalio. The road to the east leads to Askeli and then branches off towards the “Zoodochou Pigi” Monastery, and to the north, towards the Temple of Posidon and Vagionia. Furthermore, passing through ‘Agios Stathis” plateau and “Prophitis Elias”, we come back to the canal through Sinikismos.

Today Poros with its traditional local color, its quaint landscape, its cosmopolitan life and modern facilities is the ideal holiday resort.

Hydra has been named after the Island’s plentyful waters, which gushed from the springs that existed in the ancient times. Historians mention the island by the name Hydrea. In the interior of the Island, traces of ancient settlements have been found, according to archaeological excavations that took place in the location of “Episkopi”. The first residents of the island where called Dryopes.

Hydra was used as a service station for the Greek navy, and as a result, excelled in the sea commerce with neighbouring countries. Towards the end of the 18th century, Hydra was bloomming in export trade and commerce. It was that time when the people of Hydra took advantage of the English-French war and earned great profits for themselves by controlling the sea commerce.

The beautiful streets and alleys paved with slabs, and the houses, adorned with flowers, give the island of Hydra a touch of magic and a romantic aura.

It’s worth visiting the manors of the Island and watching the harbour from the top of the hill. Admiring the sunset from Periptero and Spilia, and visiting the 6 Monasteries and the 300 churches of Hydra are also  can’t miss experiences.

Especially, you have to visit the twin Monasteries of Saint Eupraxia and Prophet Elias where, in 1825, heroes of the Greek Revolution were imprisoned; one of them was Kolokotronis.

Also, you have to visit the Churches of Hypapante and St. John the Abstinent, with the wonderful murals of the 18th century, the Museum of History, which operates daily and has importand relics, archives and a library.
A very imposing sight is the Bastion with its Cannons that protected the city, being situated to the left and to the right of the harbour.

Finally, you should visit the Manor of Lazaros Kountoyriotis,  a division of the National Historic Museum, housed in the Manor of G. Kountouriotis.

The manor accommodates the Museum of Byzantine Art and History and the Auditorium “Melina Merkouri”, which exhibits paintings of famous artists.

The island of Spetses is small but nationally recognized for its valuable contribution to the Greek revolution of 1821. Greek history rightly features the island’s accomplishments on land and sea and Greek literature “sings” of its green hills and idyllic beaches. The island’s history, however, does not start with the revolution, nor does it end with it.

If we travel centuries back, we can discover signs of life which become clearer over time. For instance, numerous archeological findings show that the island was settled during the Early Helladic Period around 2,300 AD. Due to Spetses’ geographical location in the Argolis gulf and its freshwater springs, the island was used as a supply station for ships heading for the Laconia and Argolis coasts. Apart from the findings from the Early Helladic Period, there have been further findings that date back to the early Mycenaean and Byzantine times.

In the years of the Frakish rule (1200-1460), during which time a number of Western European Crusader States were established in Greece, Spetses was under the rule of the Venetians, who in turn were followed by the Ottoman Turks. During the 15th century, the island saw a wave of settlers arrive when many Christian-Albanian families (or Arvanites, as they were known) took residence in the south, merging with the local populations. In ancient times, Spetses was call Pytioussa which means pine-clad. This name was used for approximately 3,000 years until the early Byzantine era.

The island took its current name from the Venetians, who named it Isola di Spezzie, which means “fragrance -bearing land,” because of the many aromatic plants that can be found here. It is from this name that Spetses is derived.

Aegina is the second largest island in the Saronic Gulf. Being only a short distance from Piraeus, less than an hour’s sail, it is a popular destination for Athenians.

It is an island with a history that played an important role in the course of ancient and modern Greece, with elected political personalities. Here was the first capital of the free Greek state after the revolution of 1821.
Aegina is the capital of the island and is located in the west of the island, amphitheatrically built overlooking the sea. It is characterized by its neoclassical stone houses and horse-drawn buggies, remainders of forgotten eras. Sights to see are the Temple of Apollo and the Archaeological Museum, with exhibits from the Neolithic to the Classical Period.

The island has a developed tourism scene and offers all the modern comforts required for a memorable holiday. There are hotels and rooms to rent in all categories.

According to mythology, Vritomartis was born of Zeus and Karmi, and because she liked hunting, the goddess Artemis was fond of her.

Minos fell in love with Virtomartis, and in trying to get away from him, she fell into the sea where she got tangled up in some fishermen’s nets and they took her on their ship.

But on the ship, a sailor fell in love with Vritomartis so she was forced to throw herself into the sea again in order to get away from him, and she managed to swim to the island.

The girl headed towards the forest on the island, and the sailors, watching from the ship, saw her vanish as if by some holy intervention and that’s why they named her Aphaia, from the word ‘aphandos’ which in Greek means: “someone that has vanished into thin air.”

According to archaeological research, the first residents of the island were from the Peloponnese. They came to Aegina around 3500 B.C.

From then until the end of the 12th century B.C., Aegina accepted, in succession, the effects of Cretan and Mycenaean civilizations, thus creating its own unique culture. During the distribution of the Byzantine states, Aegina was to be given to the Venetians, but eventually, it was given to King Boniface.

In 1452, Alioto Kaopena, who ruled Aegina at this time, joined with the Venetians in order to avoid the threat of Turkish raids.

In 1451, after the death of Alioto Kaopena, Aegina came under the rule of the Venetians. In the revolution 1821, Aegina was actively involved in the fight for freedom.

In January 1828, Aegina became the first capital of the new Greek state.

On 26 January 1828 Kapodistrias took an oath in the Metropolitan temple of Aegina as the first governor of Greece and Aegina became the administrative, commercial and intellectual centre of the newly established Greek state.